(broo-va’-na) 1. The ineffable ultimate in which one

has attained disinterested wisdom and compassion;

2. An ideal condition of harmony, beer and joy 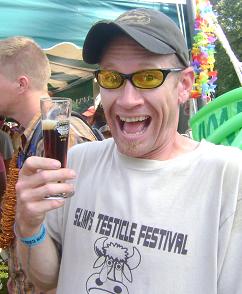 What the heck is brewvana? And is it possible to get there? Likely not. But the aim of this blog is to explore the area just at the edge of this lovely little place where we are approaching wisdom. Where compassion is the rule, rather than the exception. Where harmony and joy include handcrafted beers right alongside family time.

Centered on the role of beer in a good life, I’m here to encourage a better understanding of this ancient beverage, so integral to so many cultures, but so often scoffed at in the US. This view is changing, but it’s a slow process to move from beer as Alcohol Delivery System to beer as an artisonal craft.

Back in the old days, I drank a lot of beer. I was underage and irresponsible. I could have been killed so many times. Thankfully, I lived to tell about it, though I don’t run around telling about it all the time. War stories and whatnot. But I also don’t have a single regret. I truly value that time. That’s who I was and where I was. A few years later, I developed an appreciation for good food watching the Frugal Gourmet on PBS and cooking in restaurants during college. That turned to an interest in the possibility that beer was better than Milwaukee’s Best Light. Right around the time that craft breweries were popping up in earnest. A little experimenting and I decided that once I secured my first “real” job after college I would begin homebrewing.

That’s exactly what I did. In 1996, I started teaching English on the Navajo Reservation in Northern Arizona. We unpacked our stuff and headed for Flagstaff to stock up on supplies, which included my first extract kit–a German Altbier. Gene at Homebrewer’s Outpost was a big help in those first two years. Later, we relocated to Raleigh, North Carolina, and, sick of washing bottles, I began kegging as I continued to hone my brewing, my stylistic knowledge, my palette.

Here I am, many years later, starting to know what I’m talking about. I’m Certified BJCP judge, have ventured into barrel aging and sour ales and have won some awards–a mighty satisfying feeling. I quit my job as director of a crisis intervention program to pursue my true interests–beer. Life’s too short not to have a beer job, I decided. So I went to work for The Duck-Rabbit Craft Brewery, Farmville, North Carolina’s Dark Beer Specialist. The beers are great. If I had to have a monogomous relationship with one beer, it would surely be the Duck-Rabbit Porter. Luckily, I don’t have to commit to a beer like I do to my girl. One girl, many beers. Belgians, Wee Heavies, Russian Imperial Stouts. Those are my favorites. After a stint running a beercentric Mexican-esque restaurant, I find myself as editor of The Adams County Free Press, a weekly newspaper in the small town of Corning, Iowa.

While the primary subject herein is beer, it’s really about life. Love. Family. Building a better culture. A better attitude. Start with your family. Take care of your spouse. Love your kids madly. Don’t get so caught up in your job. Don’t get so caught up in golf. Don’t shop at strip malls or fast food joints. Don’t make your kid do 10,000 activities. Don’t worry if they don’t win. Teach them to lose. Say no to them. You’ll be glad you did. And so will they.

Back in the old days, we drank a lot of cheap beer. But the old days are over. I’ve learned from mine. These days, it’s quality, not quantity. With any luck, I’ll help cultivate a better beer culture, one based on education and responsibility. Role modeling and appreciation. How do you want to live? I’m working at living well, wise and content, somewhere near brewvana. Come along…